If you are exploring continuing care retirement communities (also called CCRCs or “life plan communities”) as a possible retirement housing choice then you probably know that such communities often require an entry fee from new residents, in exchange for contractual access to a full continuum of care services you may need in the future. Entry fees average in excess of $200,000 on a national basis but can vary dramatically from one region to another, and in accordance with the type of contract offered. In many cases a provider will offer a refundable entry fee in addition to what is typically referred to as a traditional, declining balance contract.

Common refundable entry fee amounts are 50%, 75%, and 90%, and are typically payable to the resident if they ever move out, or to the resident’s estate in the event of death, no matter how many years the resident has lived in the community.  The stipulations for receiving a refund can vary from one community to another so it is important to read the contract details.

Faced with choosing between multiple types of refundable contracts a prospective resident of a CCRC may wonder which choice is best, financially, over the long run. The overriding question is whether it makes sense to pay a higher entry fee today in exchange for receiving a significant portion of the entry fee back later. Or, alternatively, is it better to pay a lower entry fee today, thus keeping more money in your pocket, but not getting anything back in the future? (That is, if you stay in the community for longer than the amortization period, which is typically 2-4 years.)

There is no uniform answer to this question because different providers price their contracts differently. Furthermore, the choice a person makes could ultimately be based as much on the psychology of the decision as it is on the financial implications. There are some who simply cannot come to grips with the idea of paying a substantial entry fee and not getting some of it back later, regardless of what the numbers may reveal.

To help you gain a better understanding of how various choices might look I opened up our popular DecisionGenieTM financial tool and created sample scenarios for a couple (ages 78 and 79) using specific pricing numbers for a CCRC that offers a lifecare contract with each of the following entry fee choices:

Except for the pricing figures associated with each of the above three options, I left all the other data inputs and assumptions exactly the same across all scenarios. The following graph illustrates the projected ending balance of the couple’s savings and assets at the end of 12 years (approximate life expectancy) plus any applicable entry fee refund: 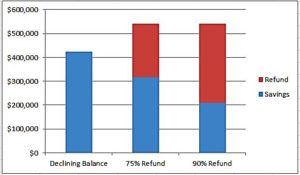 Note: “Savings” as shown on the above graph represents the total value of the couple’s savings and assets.

As you can see from the graph, the two refundable contracts come out almost exactly the same if you combine the couple’s savings with the amount of the refundable entry fee and both produce a higher total number than the traditional, declining balance contract.

However, with the 75 refund contract, the couple is projected to have almost 50 percent more in their own pockets after twelve years than they would under the 90 percent contract. Clearly, the 75 percent option would be a much better choice between the two in this case.

The declining balance option is the best choice if you only take into consideration the amount of money the couple still holds in their own personal accounts.

Impact of higher rates of return

After seeing the above results I wanted to test a few different scenarios. First, I wanted to see what it would look like if the couple were to earn an average of 6 percent on their money, instead of 3 percent as I used in the previous scenarios. (Note: an average annual return of 6 percent is a bit higher than I would be comfortable using as an estimate for a conservative portfolio in our current economic environment and with a time frame of twelve years, but I was curious to see what difference it would make.) The following graph illustrates the outcomes: 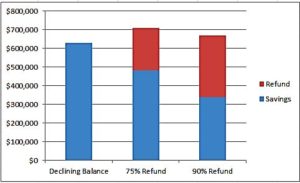 You can see here that with the traditional contract the couple would have almost 50 percent more in savings and assets at the end of twelve years using a 6 percent rate of return compared to a 3 percent rate of return. Furthermore, the spread between the declining balance contract and the 75 percent contract is about 50 percent smaller in this scenario. In other words, as the couple earns more on their own money the refundable contracts become less attractive because continuing care retirement communities very rarely pay interest on entry fee refunds.

Impact of lower rates of return

So, what about the opposite situation? What would it look like if the couple earned a lower rate of return on their money, let’s say 1%? Here’s how that would look: 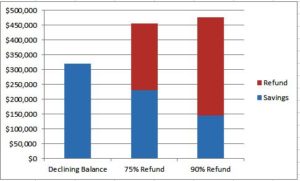 You can see above that the refundable contracts have a much greater impact in terms of total dollars when a lower rate of return is used. The 90 percent refund now shows a slightly higher total than the 75 percent contract, but the couple holds substantially less in their own accounts.

The biggest difference between these outcomes and the previous ones is that the total numbers for the refundable contracts are substantially higher compared to the declining balance contract than in the previous two graphs. For instance, the 90 percent refundable contract shows a total that is almost 50% higher than what the couple is projected to hold in their own accounts at the end of twelve years.

Keep in mind that these scenarios are based on the pricing for a single provider and; therefore, may not be representative of the outcomes you might find using the pricing for another provider.

>> Use DecisionGenie to generate your own scenarios

Aside from the psychological aspects of the decision the determining factor is the growth rate. It is clear in this particular case that the higher the rate of return on the couple’s own savings, the more favorable the traditional contract looks compared to the refundable contracts.

Yet, when you add the couple’s savings and assets with the entry fee refund, there is not a single scenario revealing that the couple does better by choosing the lower cost traditional contract and keeping the difference in savings, even when using a 6 percent year over year return. Therefore, in this particular case, the idea that a person can “keep the difference and do better with my own money” does not prove out to be true when you add the refundable entry fees back on top. The difference, of course, is that the money received from the entry free refund is not in their possession until such time as it is received. This is a very important distinction to take into consideration.

NOTE: As I mentioned previously, the pricing figures that I used in these scenarios are for an all-inclusive, lifecare community. The outcomes may be different under a fee-for-service contract.