Suicide Among Seniors: An All-Too-Common Tragedy

September is Suicide Prevention and Awareness Month, an annual initiative designed to educate people about suicide prevention as well as the warning signs of suicide. It is often a taboo topic that people avoid discussing, but suicide is indeed a major public health issue in this country. And seniors are disproportionately impacted.

An epidemic among the aging

The rate of elderly suicide is so high in part because this demographic often employs highly lethal methods like firearms, hanging, and drowning. Among those who attempt suicide, one in four seniors will succeed, as compared to just 1 in 200 youths.

One reason may be that seniors often are more frail and thus more susceptible to dying from a self-inflicted injury. They also may be more likely to live alone or be isolated, which makes rescues more difficult. And some experts suggest that seniors may plan their attempts more carefully.

What’s more, the elderly suicide rate is likely considerably higher than these figures suggest since many suicides are uncounted “silent suicides” — like deaths from intentional overdoses, self-starvation or -dehydration, and other “accidents.”

>> Related: CCRCs Can Be Good for Seniors’ Mental and Physical Health

The National Council on Aging cites a number of reasons why seniors are more likely to attempt suicide.

Atop the list is loneliness, which is so prevalent among seniors — particularly those who live on their own, have lost a spouse or partner, and/or do not have nearby family. A 2012 study by the department of geriatrics at the University of California discovered that 43 percent of the 1,604 seniors (age 60 and older) in the study reported feeling lonely at least some of the time. The isolation created by the pandemic has only exacerbated this issue, particularly for seniors who are homebound or live alone.

The death of a spouse or partner is typically one of the most difficult losses a person will suffer during their life. Older adults may also live long enough to lose other beloved family members and friends as well. The bereavement created by these losses can cause seniors to struggle with their own mortality and develop anxiety about dying all of which can intensify feelings of depression, loneliness, and hopelessness.

As we grow older, it is common to require assistance with certain tasks. For seniors who were once able to take care of themselves without help and perform other autonomous tasks like driving, such age-related decline and loss of independence can cause them to struggle with a loss of identity.

Certain illnesses and chronic disease such as arthritis, heart problems, high blood pressure, and diabetes are increasingly common as we grow older, as are vision and hearing problems These health issues can cause pain, create mobility challenges, reduce independence, and reduce quality of life — robbing seniors of the ability to do certain things they once loved.

A decline in cognitive function — which may be a normal part of the aging process or caused by issues like dementia — can impact decision-making abilities and increase impulsivity. In a 2021 study discovered that seniors recently diagnosed with mild cognitive impairment and/or dementia had a higher risk of attempting suicide.

For some seniors, such as those on a fixed income, money can be a great source of anxiety and upset. If an older person is struggling to pay bills or buy adequate food, these financial problems can trigger suicidal thoughts.

While suicides among older people can be difficult to predict, there are certain red flags to look for, according to The American Foundation for Suicide Prevention. Among them:

>> Related: Saying Goodbye: How a CCRC Helps Residents Grieving the Loss of a Spouse

Help is available…and you are not alone 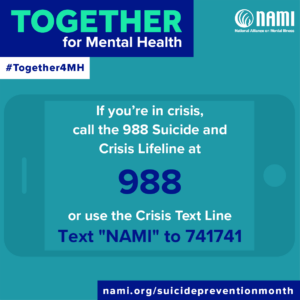 If you have noticed any of these concerning signs in a loved one, it is time to have an important conversation with them and also get help from a trusted medical professional. The person’s primary care physician can direct you to appropriate counseling resources including options like convenient online counseling.

And if you are experiencing these thoughts and feelings yourself, please know that you are not alone, your life matters, and help is available.

Earlier this year, the U.S. launched the 988 Suicide and Crisis Lifeline, a free nationwide number people can call or text anonymously (or chat with at 988lifeline.org) if they or a loved one is having an emotional or suicidal crisis. Similar to 911, the line connects to confidential support from trained crisis counselors 24/7. You also can go to your nearest emergency department if you are experiencing an emotional crisis.